As a first point, I didn’t use all of these up this month, this has been accumulating since my last empties post. Most of these products were good, some not so great and others were just meh. I thought I would take you through a few items that I’ve used up and give a wee review on some of them.

The Marcelle Gentle Cream Cleanser, I am on the hunt for a basic face wash but this was too basic. I don’t know if it was the bulky packaging or the just okay texture, but it just wasn’t my favourite at all. It did the job but it wasn’t the best and I won’t be repurchasing. I also finished a Thayers Witch Hazel Lavender toner which I have already repurchased and LOVE and I finished the Rice Water Clarifying toner from The Body Shop which was beautiful and I would consider repurchasing as a clarifying toner for those days my skin needs a bit of extra help. I finished the rose water from Amazon that I used in my DIY toner water. Yet another Body shop favourite the camomile cleansing balm. I really like this alot, but I am lazy and want to have a makeup remover I can use in the shower and this isn’t one BUT it is amazing and doesn’t blur your eyes if you get it in them. I also finished two moisturizers including (yet another) Body Shop tea tree oil  night lotion and the Sukin hydrating Rosehip day cream, both of which were really nice. The Sukin one I found didn’t sit well under makeup but the Body Shop one is definitely something I want to repurchase I have the chance. Makeup. I have finished and am decluttering a few items. First I have a few glowy primers. One of the First Aid Beauty coconut skin primer which was great and I would repurchase but when I ran out of these ones I replaced them with the Physicians formula spotlight primer. The second glowy product was the Tarte Brighter days highlighting moisturizer, which I didn’t really find all the moisturizing but it was nice to have in my arsenal. The Body Shop CC cream in fair glow. This was alright, I think it went bad near the end so it was starting to irritate my skin but overall it was a nice glowy base and I would repurchase. The Annabelle strobing drops (no longer available), I don’t know if I actually ran out of these just strangely dried out but I can no longer get them out of the bottle so alas I’m calling it an empty. The body shop mascara, this was really nice, a bit flakey and again I just had to get rid of it because I have had it for way longer than 6 months. Currently I have a few mascaras I love but I would be interested in trying more. My favourite mascara for dramatic lashes is a Maybelline one (Meghan Markle’s fave in fact but it is great) so once I’m done that one I would love to try more Body Shop ones. I also finished the PUR setting spray which lasted me quite awhile and have since replaced it with the Joe Fresh one which is almost done and now I have a few of the new Body Shop ones that I’m liking so far but will report back when I’ve used them more. 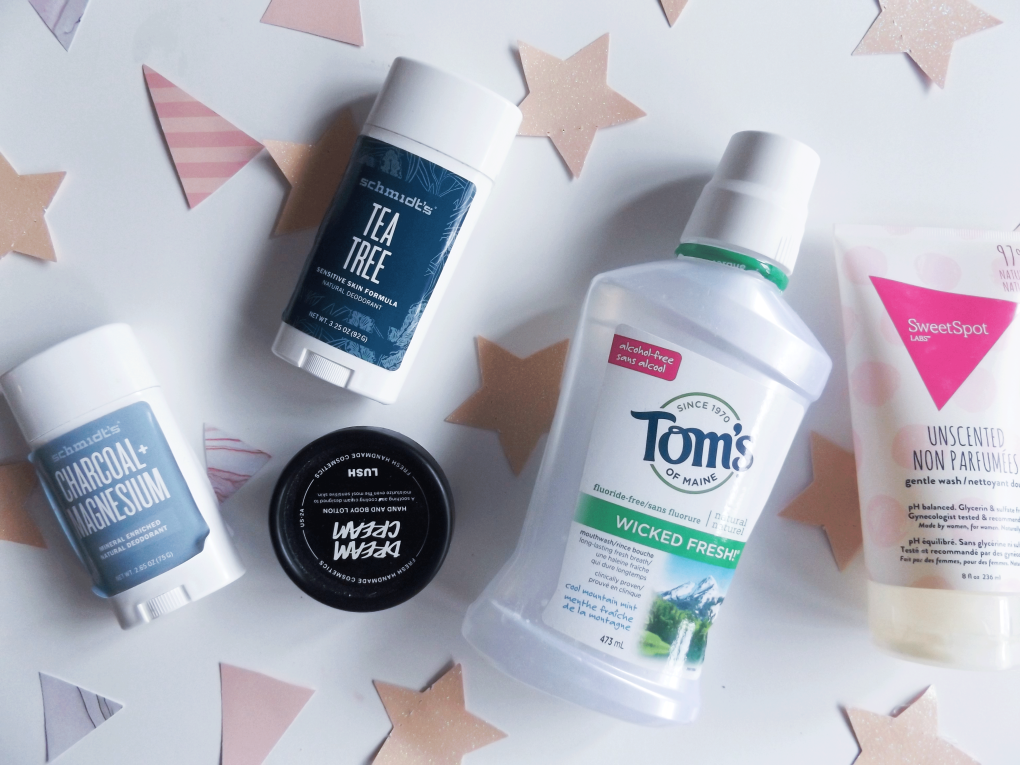 Body care. I have a few items including my favourite and staple Sweetspot Labs body wash. This is a PH feminine hygiene product and is honestly the best thing I’ve ever done for my feminine areas. I get the unscented version and I love it. I have already re-purchased this. I also finished two Schmidt’s deodorants. I really like the Tea Tree Sensitive Skin one because it didn’t irritate the old pits, but the charcoal and magnesium one I found a bit irritating. The mini of the Lush Dream Cream, this remains to be my favourite hand cream and body lotion, its light and airy and soaks in immediately. Last but not least the Toms mouthwash, it’s pretty good but I like the Jason one better because it actually purifies my mouth where as this one just felt like flavoured water.

Have you used up any products lately?

There has been a lot of talk in the media and blog world about natural deodorant. Now, I won’t get into the scientific things behind aluminum in deodorant and whether or not they pose health risks, but I switched because I wanted to wear cruelty free deodorant. I thought I would curate this post about which deodorants have worked for me and how I made the switch.

When switching to natural deodorant I started with the Toms natural antiperspirant. So when I started I think it was last year, so September 2017 (I think but maybe earlier I feel like I’ve been using it forever), I was a sweaty mc sweater. I sweat A LOT and when I first started using natural deodorants I sweat so much, I think it was my body getting used to sweating again. I will say though I never had a traditional deodorant that worked before, so it really wasn’t a matter of wanting it to be free of harsh chemicals, I was desperate to find something that worked. The Toms remains one of my favourites. I tend to use this one more for vigorous activity but even then I will also use my Schmidt’s one.

The second best one is the Schmidt’s sensitive skin formula, this is the best smelling most effective deodorant I have ever used. YES it is expensive but honestly I feel like I sweat less then I did when I wore traditional deodorant. The Jason and Green Beaver deodorants are not super effective, they just don’t work on me, I can smell myself after about 2 hours of wear time. The Kiss My Face isn’t my favourite either, I find it doesn’t really work, I usually put this on after work before I workout but its not the best I am just trying to use it up. Same with the deodorant from my hometown, it smells really good but I use this either layering deodorant or a before bed one. What do you need to know about natural deodorant? First, you should know you have to apply it more regularly and second you need to thoroughly clean your pits each night and you’ll be good to go. You really just have to let you body detox per say in order to get used to wearing natural deodorant and slightly smelling yourself if you are very sweaty, even then I’ve noticed that I don’t smell a lot! So progress?

Have you ever tried natural deodorant?