The Complicatedness of running (yes I made up that word)

I have come to the conclusion that there are two types of runners: experienced and inexperienced, I fall under the latter category. My mother falls into the first category, of running for over 20 years, meaning she can run far and stay with it mentally. Me: I run up the street and then want to turn around for ice cream, this is too often the thought I have when stepping out the door. 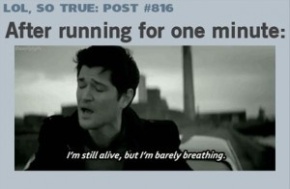 When I was in grade eight, my whole goal in life was to be on every sports team and this included cross country, which is where I discovered my asthma more in depth than ever before. I had this awesome teacher who would run with me afterschool, even if it wasn’t a practice day. She was (well still is) this little tiny ball of muscle who can run like the wind without seemingly getting tired. But I never felt judged by her, so points to me.

However, after grade eight was over and the summer was over, I got more into other things, not running, more exercise videos, skating more often etc. Well long story short, I stopped running for about a year and just skated. Then hit the 10k run my mom wanted to do in Halifax, so I was like well if I get to go to Halifax then why not. WRONG I WAS. I am an inexperienced creature, with my mind set always flashing to, “why am I not fast enough”, or “I wish I didn’t have asthma” or “people that see me must think I am super out of shape”. Okay, I was a tich dramatic. My asthmatic lungs frustrated me (and still remain a nuisance) in the short time I have been running. The unfortunate part about my asthma is that from grade 11 until now it has not improved, regardless of the steroid inhaler and Ventolin. Which brings me to the complicatedness of the sport of running.

So, people rave about running, how it clears the mind, and makes you feel good (accomplished after, good after, but during…whole other story). And, when the bulk of society thinks of a good runner as a fast runner it can be very discouraging. However, I realized that I will forever be a little slow poke, running beside my mother who evidently can go very fast for a very long period of time, seemingly not struggling as she picks up her feet and breathes properly. It was not until this summer, after a horrid run, no surprise here, with my mother, that I came to a realization about Chrisinda’s journey with running. I didn’t know why I cared so much about being fast. The nice thing though, about my tiny realization of being an avid slow person, is that at least I am trying. I may only run three times a week, slower than the average, but at least I am attempting to keep my lungs in shape, rather than not work them at all. I also realized running is much different than figure skating. A: it’s harder. B: you don’t get to wear skates…or dresses, and C: its way fricken harder. But, since the ice is not in my tiny town during summer I am forced to switch up and tackle the bare road.

But hey, I am not the only one who realizes this. Sophia Bush, the amazing in shape Sophia Bush, also, in her words “loathes running” and she has asthma too, which shouldn’t make me feel better but it does, I mean she does plays a bad ass cop (maybe I am secretly a bad ass cop). Mindy Kaling, also a great woman, is an avid slow jogger and admits motivation is super hard. So, as I continue to equate my life to celebrities, I also think of those who judge slow runners and say they are out of shape. Well, if you think about it, some people can’t even walk because of lung or heart disease. Why should it be your goal to run quickly? Or sprint all the time? Shouldn’t the goal just to be doing something good for your lungs in hopes of bettering your overall health? Yes, I think so. So if you’re like me and get really angry about being a slow runner and wheezing like an 80 year old just think of the cliché mom pep talk “at least you’re out there” or the wonderful quote “I run…I’m slower the a herd of turtles stampeding through peanut butter, but I run”. 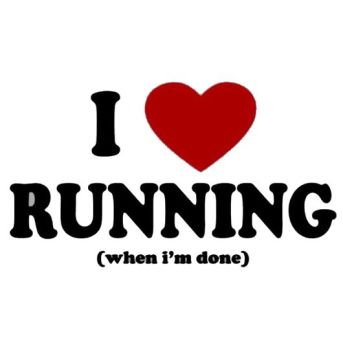 ← what is summer?
Inspirational Women are Awesome →